It is worthwhile, on yet another “International Holocaust Remembrance Day,” to consider perhaps one of the greatest acts of chutzpah: siting Israel’s official “holocaust memorial” on a site directly overlooking Deir Yassin—a Palestinian village whose population was murdered out of existence in exactly the way that the Holocaust Storytellers claim happened to Jews in World War II.

The massacre at Deir Yassin took place on April 9, 1948, when around 120 Jewish terrorists from the Zionist terrorist groups, the Irgun Zevai Leumi and Lohamei Herut, attacked the village without warning.

The attack was carried out not as part of some ongoing “war,” but merely because the Zionists were then currently busy with an ethnic cleansing program to drive the Palestinians out of all land which had been earmarked to become Israel.

As described on the official Deir Yassin remembrance site, the village of Deir Yassin lay outside of the area to be assigned by the United Nations to the Jewish State, and it had a peaceful reputation.
But, Deir Yassin’s “sin” was that it was located on high ground in the corridor between Tel Aviv and Jerusalem.

Deir Yassin had been slated for occupation under the infamous “Plan D,”—a formal plan drawn up by the Zionist movement by Israel’s first Prime Minister, David Ben-Gurion, in 1947.

Plan D, or “Plan Dalet”—named after the fourth letter in the Hebrew alphabet—was launched six weeks prior to the end of the British Mandate in Palestine. It was called Plan D because it had been preceded by Plan A (February 1945), Plan B (May 1947) and Plan C (November 1947), all of which had been designed to expedite the ethnic cleansing of Palestine to make way for Jewish settlement.

Plan D consisted of at least 13 separate military underground operations which were carried out by the “Palmach”—the elite fighting force of the Haganah, the underground Jewish army—which were set to be put into action before Arab forces entered the areas allotted to the Palestinians by the United Nations Partition Plan.

For this purpose, the Haganah created a “Committee for Arab Properties in Villages,” the purpose of which was to register and take possession of all Palestinian properties in the villages the Zionist forces had conquered. Similar committees were established in major Palestinian cities like Haifa, Safad, Yafa and Tabariyah.

Early in the morning of Friday, April 9, 1948, commandos of the Irgun, headed by Menachem Begin, and the Stern Gang attacked Deir Yassin, a village with about 750 Palestinian residents.

Most sources put the number of dead at 254, including 25 pregnant women who were bayoneted and 52 children who were maimed in front of their mothers before being beheaded and the mothers slain. 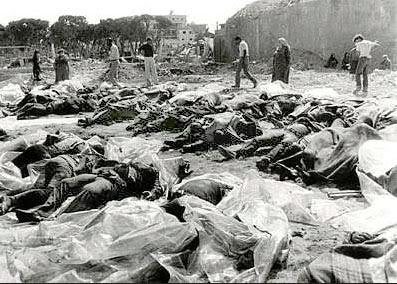 Rape, mutilation and humiliation were the norm, according to survivors. Mahmoud Kassem El-Yassini, who was 5 at the time, said in his testimony that “there were [corpses of] women lying in houses with their skirts torn up to their waists and their legs wide apart; children with their throats cut open, rows of young men shot in the back after being lined up at an execution wall. There were even bodies of babies.”

El-Yassini recalls, "I remember hearing a Jewish terrorist who was touring the village and reporting the massacre, saying, 'Minus 15 Arabs. Minus 60 Arabs.' After a while his message on the radio to headquarters became: 'It's difficult to count.'"

According to eye-witness Abu Yousef, who was 21, "after the battle, the Jews took elderly men and women and youths, including four of my cousins and a nephew. They took them all. Women who had on them gold and money were stripped of their gold. After the Jews had removed their dead and wounded, they took the men to the quarry and sprayed them all with bullets... One woman saw her son taken some 40 to 60 meters away from where she and the rest of the women stood, and shot dead. Then they brought Jewish kids to throw stones at his body. Then, they poured kerosene over his body and set it ablaze, while the women watched from a distance."

Twenty-five male villagers were loaded into trucks, paraded through the Zakhron Yosef quarter in Jerusalem in front of cheering Jewish crowds, and then taken to a stone quarry along the road between Givat Shaul and Deir Yassin and shot to death. The remaining residents were driven to Arab East Jerusalem.

A final body count of 254 was reported by The New York Times on April 13, a day after the dead were buried.


At least ten houses were dynamited, and the local cemetery bulldozed. Within months, the area was resettled with Jews from Poland, Rumania, and Slovakia—who had all “miraculously” escaped the “gas chambers”—and the village was renamed Givat Shaul Bet.

Deir Yassin was wiped off the map. As Jerusalem expanded, the land of Deir Yassin became part of the city and is now known simply as the area between Givat Shaul and the settlement of Har Nof on the western slopes of the mountain.

Today, the site of the massacre of Deir Yassin is contained within the grounds of the Kfar Shaul Mental Health Center, a mental asylum—for Jews only, of course—in Givat Shaul. 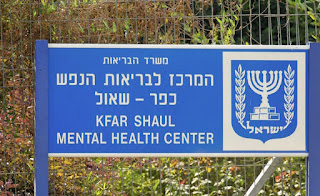 What makes the site even more poignant is that it is located just 2,000 feet away from the front of Israel’s holocaust museum, Yad Vashem.

Visitors to Yad Vashem will look out directly at the massacre site from the front of the “Holocaust Memorial.”


It has to be the ultimate act of Chutzpah: to locate a memorial to an alleged Jewish holocaust at the site of a very real holocaust carried out by Zionist terrorists against Palestinians.

The siting of Yad Vashem at this spot reveals much about the psychology behind the Holocaust Storytellers, and how they view the world.
Posted by Peter Winter at 12:14 PM 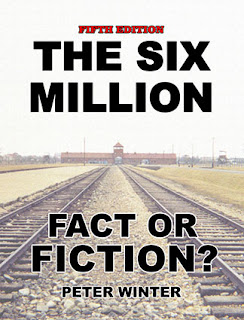